by David Lillie - Posted 2 months ago 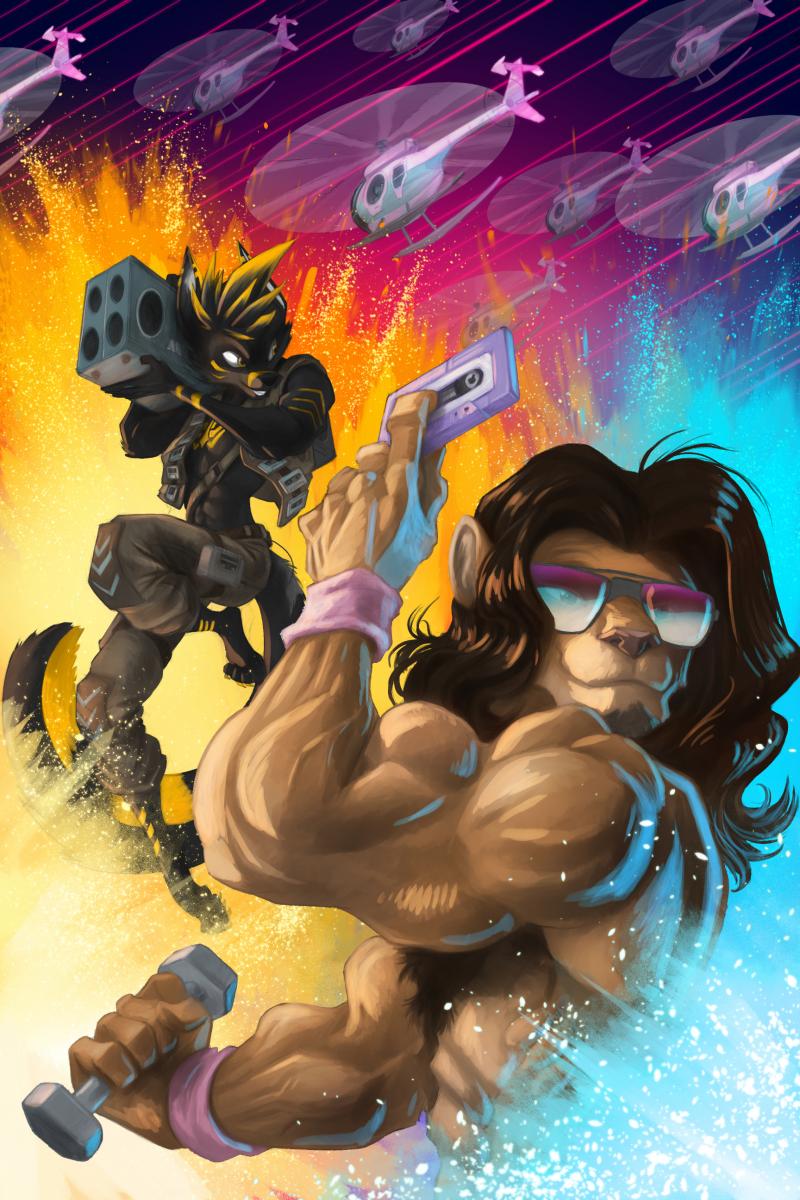 MEGAPLEX & Cthulhu
The illustration fails to capture the full experience of MEGAPLEX.  (Although they did have some incredible art decorating the event.)
Thank you to everyone who came out to see Liz & I (And Geo, and Skidd & Phuufy.)  It was great having a whole set of Vivid authors there, and awesome meeting old & new readers.   I loved some of the commission prompts we got to work with!
The dealer’s room seemed twice as big as last year, with a huge swell in attendance as well.  Megaplex has that vibe Liz and I felt in the very early years of Anthrocon- the feel of an event with upward momentum, carried by enthusiasm and a pure sense of fun.
Also, PSA for the scattering of folks who occasionally ask when they will see Dreamkeepers at Anthrocon again- you won’t.
Megaplex is our new convention home- the staff is absolutely fantastic.  We’ve been to many events, and this one is run smoothly and professionally, by a great group of people.  The other dealers are spectacular.  Big name artists like Golden Druid, tried-and-true outfits like Ringtail Cafe & Paw-to-Press, and more pizzazz than I can adequately describe in one journal.
And as a bonus, there’s a HUGE array of extracurricular activities in Orlando, from Disney attractions to tourist traps of the highest caliber.   (Word to the wise:  The haunted house in Old Towne is more than worth it.  Cthulhu large & in charge.)
We brought as much as we could to the table, and all the big ticket items sold out.   Again, a heartfelt thank you to the readers who came out to see us, won prizes, and went home with Vivid books, games, art, & merch.   We are already looking forward to seeing you again next year.
And thank you as well to the readers at home who took advantage of our MEGA sale online- we’re delighted to deliver unique indie books and art, and you’re helping Vivid keep the lights on for our fantastic artists and authors.
A quick Vivid recap now that we’re back:
The Dreamkeepers Volume 5 IGG, our most involved campaign ever, has been successfully fulfilled.  As well as Cloudscratcher Volume 1, and Beyman’s “Reports from The Institute.”
What’s coming next?
Fulfilling this autumn is ABD’s first graphic novel “Bethellium” (Still In-Demand on IGG) and the Vivid Rescue Campaign for UberQuest Volume 2, Call of the Relic.
Also, Couchcon customers- the final items have been manufactured and should be here soon, so your loot will be on the way shortly.  Keep an eye on your e-mail for tracking.   (Same to the Dreamkeepers Pledge Pin backers- we’ll be asking for your addresses tonight to get the Vi pin mailed.)
Volume 6 production continues, as well as new Prelude comic updates- and upcoming Vivid plans include a Prelude Collection 2 IndieGoGo this fall.  We’re also moving to colors on the “Huge Ultra Sexy” commission from Couchcon, which has 40+ unique characters in the mix.  (Folks in the backers-only Dreamkord, we’ll share progress pics as they are prepped.)
In addition to book creation and publishing, we have some video content in the works I’m excited about- I want to create a series that impart everything I learned at art college, and more, with a price tag of zero.
So- more art, books, videos, from Liz & I, and more Vivid authors.   To say nothing of the secret things we have in the works.
Stay tuned!
(The best way to do that, unless you implicitly trust the social media corporations, consider jumping onto our free newsletter:
https://landing.mailerlite.com/webforms/landing/t4r2y6 )